There is no secret in the fact that guest blogging has been on shaky ground for some time now. Google has made many statements over the last year about guest blogging as the tactic grown as a link building tactic.

Supporting its stance, Google has been aggressively going after companies that it considers are violating its SEO guidelines, predominantly link networks. And, as a major step in this regard, Google recently penalized a popular guest blogging network, MyBlogGuest.

MyBlogGuest is one of the largest and most well-known guest blogging networks within the industry. The network is also famous because of its founder, Ann Smarty, a prominent name in the SEO industry who, at the time of writing, boasts more than 39,000 followers on Twitter.

MyBlogGuest Penalty- Why Did it Happen At All? 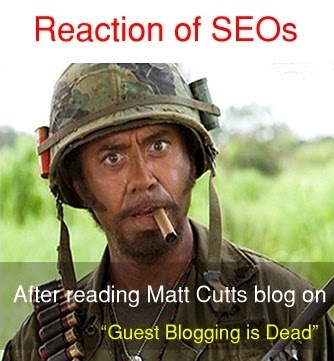 “Stick A Fork In It, Guest Blogging Is Done”, that’s what Mat Cutts had asserted a few months back, making it crystal clear that if any company is using guest blogging as a way of gaining links in 2014, it should stop as over a period of time it has become a really spammy practice.

However, note that there definitely are many cases where guest blogging can be high-quality and can be valuable to a site’s visitors, and Cutts does not discourage that. He just reiterates that guest blogging shouldn’t be done for the sole purpose of link building. He states, “There are still many good reasons to do some guest blogging (exposure, branding, increased reach, community, etc.). Those reasons existed way before Google and they’ll continue into the future.”

In the case of MyBlogGuest, it seems that the linking issue was the problem as they had quite an open policy on linking within the guest blogs, mainly the links that could not be no=followed. But, Ann Smarty, the founder of MyBlogGuest, has come up strongly on Google’s this decision, and has tweeted, “Even though #myblogguest has been against paying for links (unlike other platforms), @mattcutts team decided to penalize us”.

“We are already policing the links: No made-for-SEO links are allowed within our platform (for at least a year now; We’ve been always advocating no-anchor-text links but we started actively policing them 2 years ago, then we stricken the rules even further). You are free to link to your home page but no keywords are allowed (just names), for example,” Ann explains.

If you’re registered on MBG and have cited your websites and blogs there, for which you’re accepting guest posts, then there are great chances that your website/blog has got at-least a Page Rank penalty and an unnatural linking message in your GWT.

However, no need to panic as you can still get out of this situation by following the subsequent recovery tips that will help you adhere to the Google guidelines and uplifting the penalty.

I am quite sure that these tips will help you in recovering soon. Although these are not only for the ones dealing with MBG penalty, but everyone else who is involved in guest blogging must consider these points, and I’m sure this way you can leverage the true power of guest blogging by playing safely under Google’s rules.