Officially the fastest growing corporate product ever created by Microsoft, Office 365 has had an easy time surpassing Google Apps as the most used cloud-hosted productivity application. Here’s a visual of what took place over in the last three years: 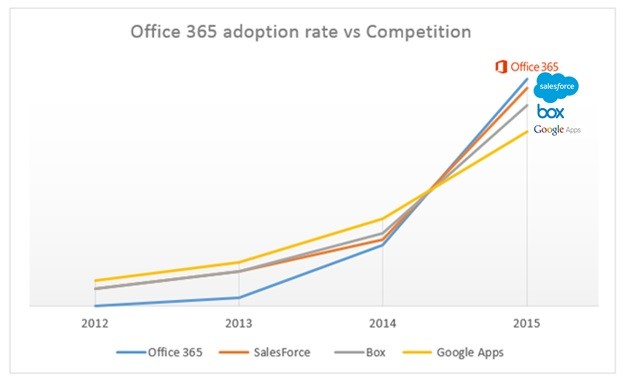 These finding are based off the BitGlass report that surveyed about 120,000 organizations. The report shows that Office 365 has more than tripled its market share from about 7 percent to 25 percent.

Regardless of Microsoft’s dominance in this market, all the cloud based software from 2014 to 2015 experienced a huge surge in growth, as cloud hosted technology undoubtedly increases productivity.

A big part of this surge in Office 365 usage is due to the adoption rate of larger companies with over 500 employees. They are constantly choosing to use Office 365 over Google Applications with rates as high as 34% adoption.

Why the explosive growth of Office 365?

With some analysis of Microsoft’s growth, we can see that they have been providing clear incentives to use their services more aggressively than their competitors. Microsoft has been consistently visiting companies that have previously stored their email and other apps on-premise, and giving them indisputable financial reasons to move to the cloud.

With all these companies looking to solve the problems they have been having with on-premise applications it’s no wonder Office 365 has been the application of choice in the last year.

However, on further analysis it doesn’t quite seem that Office 365 is actually taking market share away from their competitors, but rather simply acquire new market participants that were previously using the old email software like Microsoft Exchange.

Positioned to make something great

Despite most of the new movers to Office 365 being from the old exchange email, it looks like Microsoft is positioned right now to make big moves with Office 365, and Microsoft knows it too. The recent introduction of Power BI into Office 365, the new Windows 10, and the soon to be produced SharePoint 2016 are only a few of Microsoft’s new developments. It’s looking to be an exciting ride for Microsoft users in these coming months.