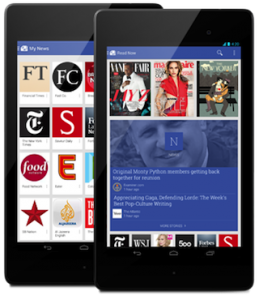 Since the demise of Google Reader earlier this year, Google hadn’t shown its hand for a replacement beyond the storage hogging Google Current

The new app combines all of your news sources into a single, seamless feed. Each magazine appears as a single card entry, which you can drill down into to read.

Google’s quest to kill the RSS protocol continues however, as there doesn’t appear to be any way of adding your own feeds. Another surprising omission is the lack of a Google News reader, meaning that there is still no Google client for this popular service.

The front page is a Read Now list containing a collection of news stories that might or might not be from your feeds, but rather inspired by them based on subjects the app expects you to find interesting. The initial rollout contains content from 1,900 websites and magazines.

At this stage, Google Currents will remain available as the rollout continues, however readers in the UK, U.S., and Canada will be greeted by a nag screen to update.