Today’s industry is dominated by several interactive websites and mobile apps. Every third out of five firms has a custom-made website and mobile app. Thanks to web and mobile app development companies for creating high-quality, functional apps. Backend development is the most crucial aspect of developing mobile or web apps; it is the backbone or foundation of the development process. Interactive application development begins with a functional backend. Python and PHP are two languages that have acquired remarkable popularity in backend programming and have long been a hot topic of conversation among the developer community and businesses.

These are the most extensively used programming languages, and practically every developer prefers them. The capabilities, functionalities, and other characteristics they supplied in web development contributed to its great appeal. On the other hand, the web development market is brimming with diverse programming languages, but the fight between PHP and Python is always the talk of the town. Both languages have strong positions in terms of market size, history, features, functions, and usage. This robustness makes the decision between Python and PHP for web development a difficult one.

PHP is the programming language of choice for web designers and developers. PHP is an open-source server scripting language that may be used to create user-driven, interactive web pages. It has a lot of remarkable capabilities. PHP is a developer’s language of choice, with an enormous selection of libraries, plugins, and add-ons to enhance functionality and a large community behind it.

It was first known as Personal Home Page when Rasmus Lerdorf created it in 1995. It was dubbed PHP- HyperText PreProcessor after it was developed into a fully functional language. PHP is a complete server-side language with built-in library support, database support, and parsers.

PHP is useful for the backend development of web apps because practically all web browsers support it. Through web development frameworks, developers can also access ready-to-use modules and functions for typical activities, such as a contact form, a search queries tab, or a menu dashboard.

PHP powers almost every website on the internet. It’s a language for managing dynamic content on HTML sites, databases, and session tracking that’s quick, practical, and adaptable. PHP can be used to create whole websites for eCommerce, fintech, and other business behemoths.

Python is a free, open-source programming language that emphasizes object-oriented programming techniques. It is currently one of the most extensively used languages, with simple high-level grammar. Python’s guiding ideas are “simplify whatever we can” and “simple is better than complex.” According to the Stack Overflow poll 2020, it is one of the most popular and desired languages.

Guido Van Rossum created it in 1991, and it is a top choice for projects involving software development, whether it is product development or application development. Python is trusted by several companies all across the world.

Its fast prototyping and update capabilities are aided by its easy learning curve and performance. Python is a very supportive and adaptable language for many new emerging technologies such as data science, machine learning, and artificial intelligence, thanks to its robust inbuilt library. 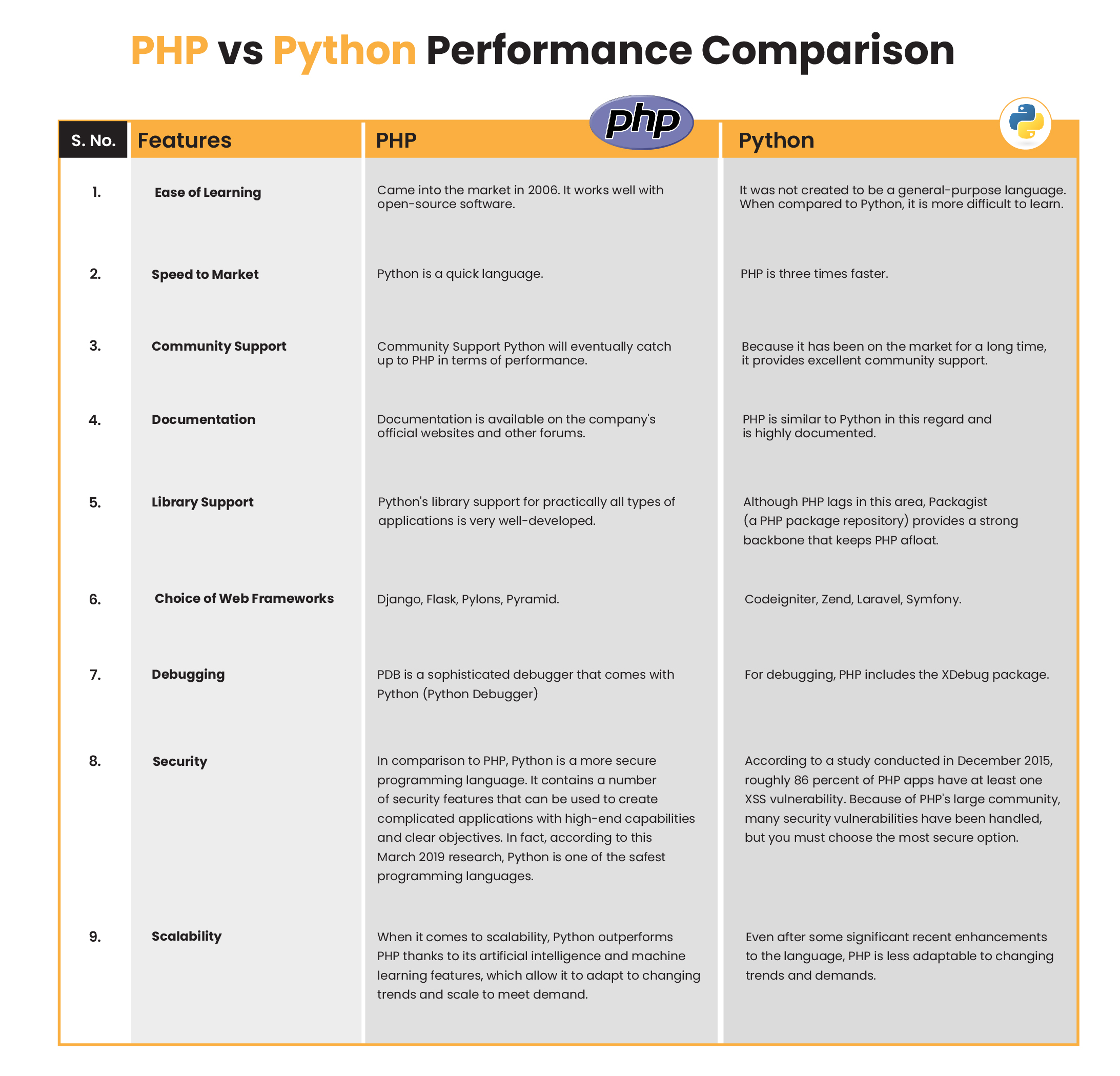 Is PHP more efficient than Python?

Yes. In terms of speed performance tests, the modifications in the latest version of PHP have propelled it to new heights. When compared to Python, PHP is usually the speedier programming language. The PHP core team has added several functions to help PHP run faster. However, Python does not have as much speed issue because most websites do not demand that much processing power. However, PHP is a solid choice for time-intensive applications.

Read More: Top 75 Programming languages in 2021: Comparison and by type

PHP vs. Python: Which one to choose: Conclusion

To recap, Python and PHP are nearly identical in most respects. Python is superior to PHP in the eyes of others. Python appears to have the upper hand over PHP. Here’s what we think you should do:

Web development with PHP and Python both have advantages. While PHP has traditionally been the go-to language for web development, Python is swiftly catching up.  Python is a secure, versatile, and flexible technology that provides enterprises with many chances for machine learning and data analysis.

So, between Python and PHP, which is the most significant programming language for application development? It’s entirely up to you and your company’s functional requirements.

Python is a fantastic choice if you wish to use machine learning codes or need Unicode support. On the other hand, PHP is the way to go if you’re looking to do web development and server-side scripting. Find out more about our software development services, including Python and PHP programming. Contact ISHIR experts.