After the disaster of Windows 8, Microsoft has been attentive to the feedback of the users. Free, loaded with features and apps – Windows 10 is seen as a remarkable improvement from Windows 8. Here’s what is more to it.

This time they did learn their lesson – Mistakes Corrected

The biggest complaint of course was the full-screen windows live start menu that a minuscule percentage of people actually used, even fewer of which used to its full potential. This isn’t to say that it wasn’t useful, however. The problem here was simply that not very many people wanted a tablet designed interface when they were on their pc or laptop in addition to these people not knowing how to interact with this interface. Great news though, they’ve done away with all their previous shenanigans. 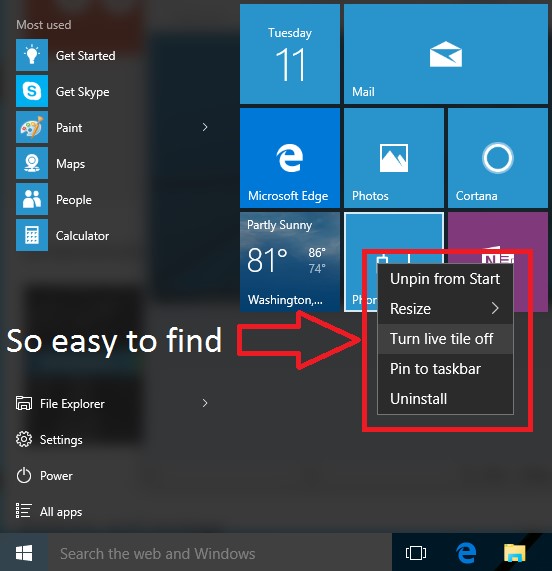 Now you can see that this is a bit more of an afterthought for Microsoft rather than a main feature. It isn’t default at full screen and also contains all of the most commonly used buttons organized neatly to the left-hand side, very similar to the way Windows 7 was set up.

Even better– with only two clicks of the mouse you can decide to do away with these tiles if you so desire. Now it feels a lot more like Windows is saying “Okay so most of you didn’t love this, we know, so only keep it if you were one of the few that did” These customize buttons are accompanied by the option to resize the entire start menu, what a relief.

Another painful issue windows 8 users had to put up with was the constant opening of folders in maximized windows with no escape except for… literally pressing the escape button. Why Microsoft decided to take away the “minimize” and “change window size” options, remains a pathetic mystery. For visual proof of this, here’s a snap of what the dreaded “photo” program looks like. This has the majority of Windows users audibly sighing with relief. 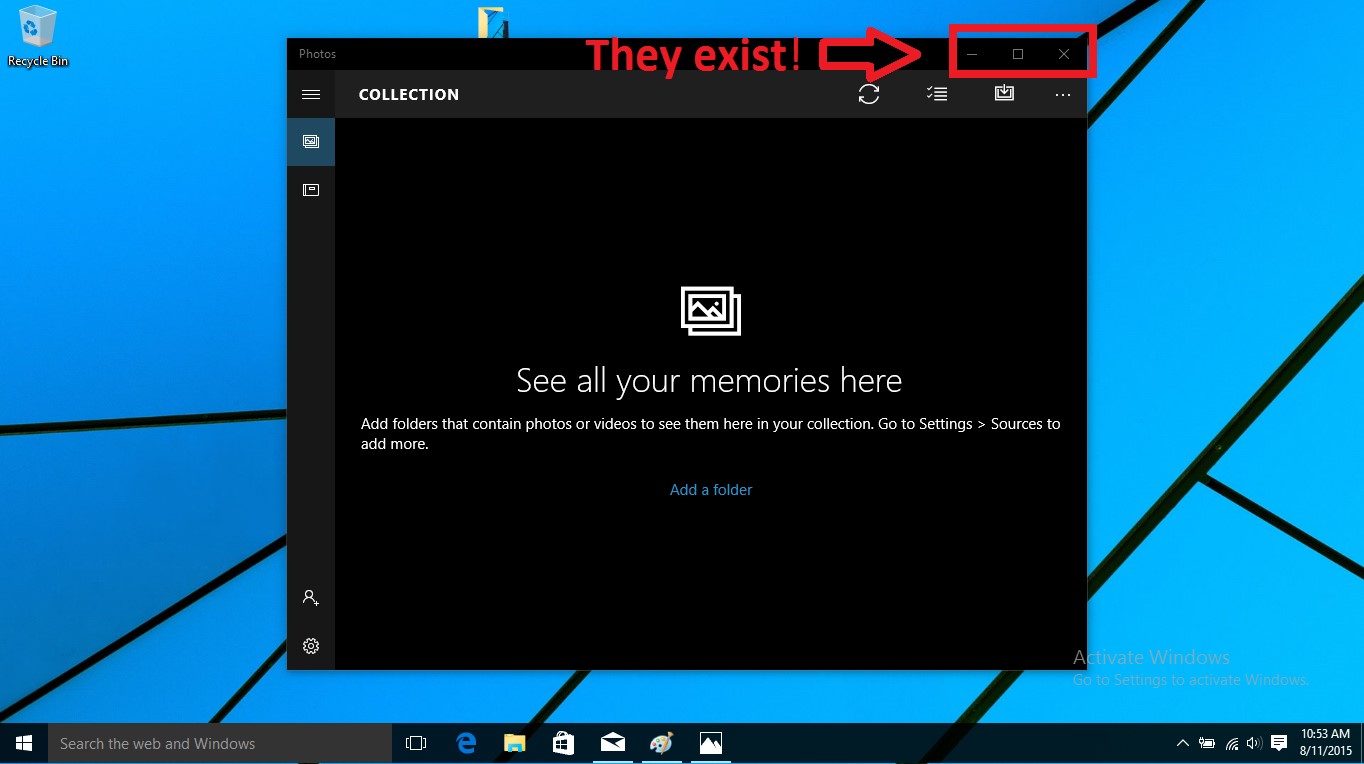 What’s actually new and how it measures up? 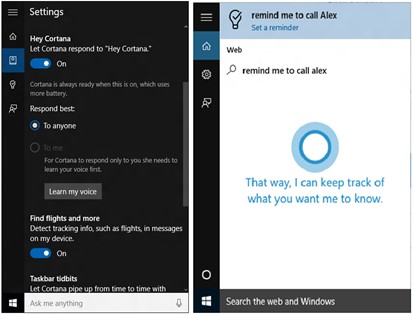 Let’s take a look at the Microsoft version of Apple’s Siri. To the right you can see some snaps of what Cortana looks like on Windows 10. Simply click on the search bar and you can interface with Cortana the same way you can interface with Siri. She seems to function in a pretty much identical way too. So far, Cortana is an impressive addition to Windows 10 you can either use every day for planning, ask for a few jokes when you’re bored, conduct quick research through, or simply totally ignore.

The virtual desktops and task view function are actually really impressive. Out of the box, Windows 10 comes with a taskbar that has a few defaults, the first of which is the task view function. Simply click on it and it will take you to a screen that looks like this. 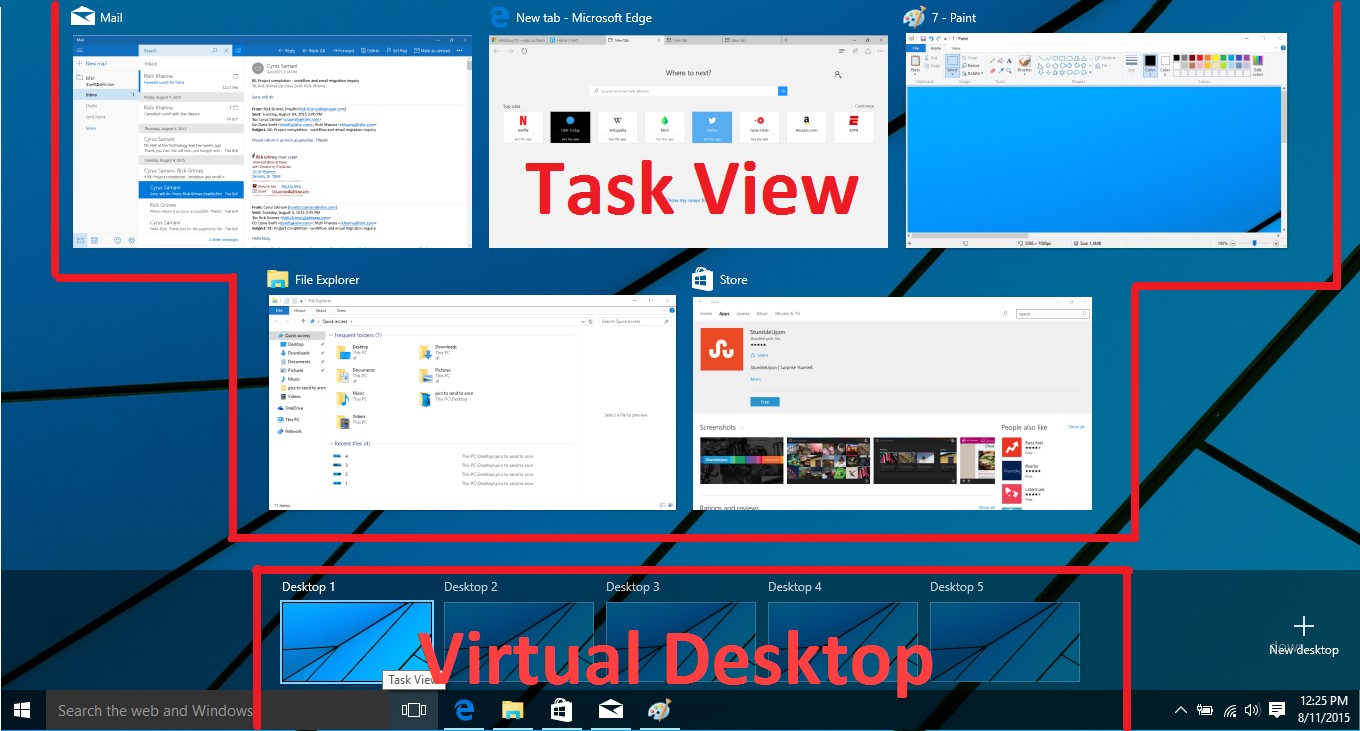 In one single interface you can see everything you’re currently doing on your desktop, and what you’re doing on other “virtual” desktops. This effectively means you can have up to 5 monitors handling different tasks if you so desired. Dubbed as the “poor man’s” multi-monitor setup, many people may look at this and initially think of the sheer amount of clicking back and forth to be annoying and cumbersome to efficiency. The truth is that it actually performed extremely smoothly and everything that went on in the different desktops was perfectly reflected onto the task view. The ease at which you can transfer from a different desktop and a different task is somewhat mind-blowing. This time around we’re pleasantly surprised.

With a look at Microsoft’s new Edge Brower, the pleasant surprises stop there, unfortunately. With a few minutes wondering about the World Wide Web, you can tell it isn’t quite the experience you’re used to with Chrome or Firefox. Although it is infinitely better than the old internet explorer, there are still many web apps that don’t work in Edge (e.g. Nest.com temp change), the text selection while typing is horribly buggy, there are no extensions available for it yet, and the tab function is chunky and tough to use. Even with all of these things holding it back, Edge Brower is just about as fast performance wise, as Chrome. Because it has been recently built from the ground up, it is expected to have all these kinks in performance, se we won’t bash the new browser too hard, as it has a lot of ability to be great in the not so distant future.

Overall, we’re extremely happy with Windows 10, especially when compared to its counterpart, Windows 8. With the mistakes corrected and nice additions like Cortana and the Virtual Monitors, this is a great setup for just about anyone. Hopefully, Microsoft will be able to do something great with their new Edge Browser that will really make Chrome and Firefox shake in their boots.