A recent exchange between an Italian CIO, Stefano Bruscoli, Municipality of Pesaro, and Microsoft has sparked some conversation over which productivity software is more cost effective, Office365 or Open Source.

Microsoft published a report based off of this exchange that states that Microsoft Office 365 is 80% cheaper than alternative open source software like OpenOffice. Despite the discovery that this statement is slanted heavily in bias of Microsoft, what still remains to be discovered is how much truth does this claim actually have?

What makes this claim biased?

The report that made this 80% cheaper cost claim was based off of the 15 minute loss of productivity Stefano Bruscoli’s team was experiencing due to problems reviewing, formatting, and having software crash when using OpenOffice.

The catch is, these issues were simply adoption acclimation effects that tapered off in the long-run. As the employees became more accustomed to the software, the user count that was previously experiencing the productivity loss dropped from 350 to a baseline of 50 employees.

Microsoft’s claim of being cheaper did not factor in this tapered graph, but instead created a projection of loss that visualized into a straight line over the course of five years. What the company’s actual losses looked more like this: 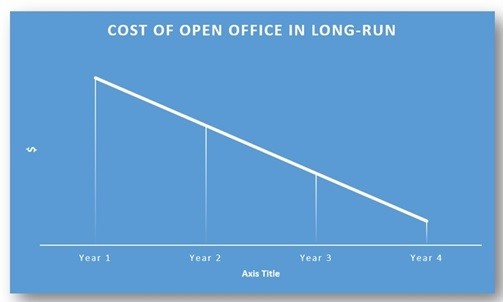 As opposed to saving on better or worse software, these numbers reflect the difficulties that employees encounter when adopting new software and how long it may take to completely adapt. This can often take quite a few years because of the amount of companies that employ vendors rather than open source software.

So, this begs the question, “What was Microsoft thinking when they created this report that made such a claim?” to which the answer is simple: Microsoft did not consider things in the long-term when considering how an employee changes in their interaction with a software over time.

So, what is the better choice in the end?

With respect to this report and the claims made by Microsoft about being the more cost effective choice, the best choice for each company eventually boils down to what the company needs most. But this is not a simple catch-all to say “it’s up to you”. Instead what this means is that if your company absolutely depends on a software that offers full compatibility, reliability, and vast feature options, the Office 365 subscription is likely worth the investment.

However, open source software is becoming more and more developed by the year, with impressive management showing significant improvements.  Cost-wise, open source software can cover the adoption costs innate in this route quite quickly. Many times this can fit right into a company’s needs, especially if it is a smaller company looking to break-even on their startup costs as soon as possible.

In either choice of Microsoft Office 365 or an open source software, we can support you in your migration. Drop us a message to find out how to go about doing this.