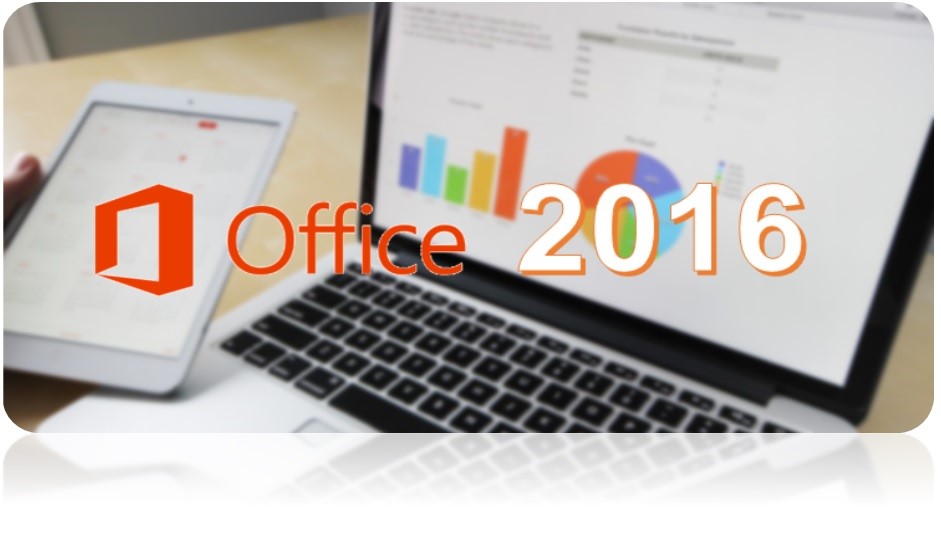 With the new preview of Office 2016 coming out earlier this week, we’ve had a chance to review it and there’s one thing it does massively better than its 2013 counterpart: allow teams to collaborate in more efficient and innovative ways.

This is no surprise either as Microsoft has been gearing up to dedicate themselves fully into this direction as Power BI, SharePoint 2016, and Windows 10 all reflect this.

If you’re considering upgrade to Office 2016 in the near future, here are a few big points that you can expect:

Besides these large introductions, Microsoft Office 2016 comes with quite a few smaller tweaks.

As collaborative as Google? 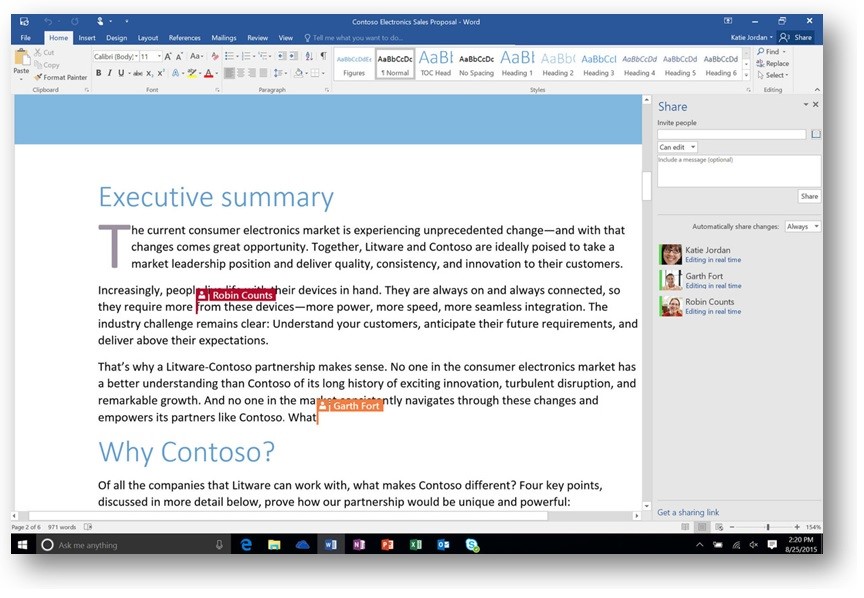 With the new 2016 version of Microsoft Word, you’d be hard pressed to find something that isn’t also part of the Google Docs, we know so well. Share and type in real-time with other people though an easy to use email sharing system. As this was available in the 2013 version, 2016 makes this functionality so much more easy to use and is really highlighted in the home page of a Word document as there is now a large “share” button located in the top right corner of the window.

This button isn’t specific to Word either, you can find it in Excel and PowerPoint as well. This not only streamlines the process of working with others on the same file in real-time, but highlights Microsoft’s want to push this new strategy. You get the convenient list of who made the last edits and what they made as well.

As Microsoft Online has been around for a few years now, Office 2016 finally imported the idea of co-authoring into the mix. Instead of having a bunch of annoying “locked” paragraphs that were un-editable to a user after the guest had signed off, we finally have a functionality that works smoothly. 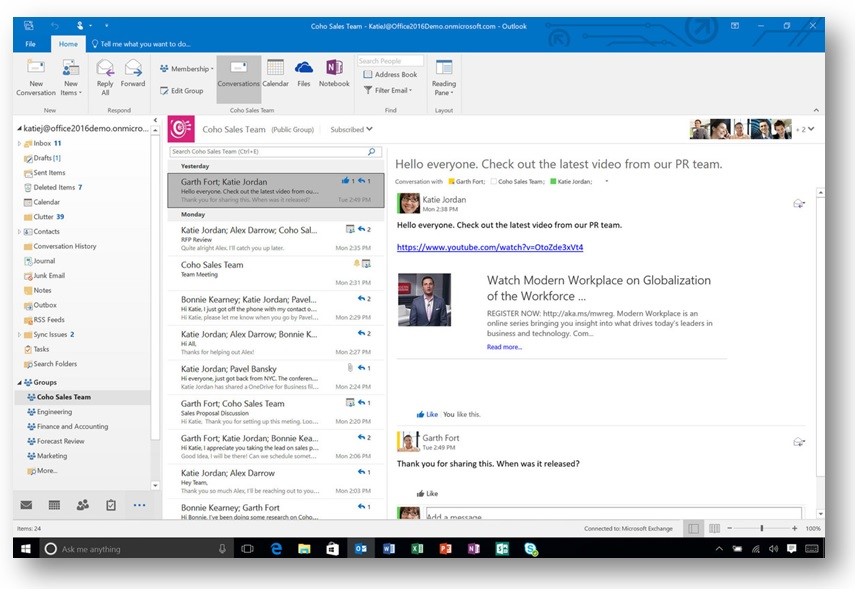 If you take a look at your current Outlook and the 2016 version you can see a few changes, one of which is the “Groups” tab that Microsoft has decided to introduce. Instead of having to go look around in a few difference places, Outlook now provides a platform to view a shared inbox and calendar along with OneDrive. Also, a new addition that has already been implemented is the Clutter function that learns what you ignore and what you don’t.

This function runs in the background and collects over time, so it’s great for creating a stash of items that you’ll forget about only to have people ask you why you never responded. Turning off this function is probably the best way to deal with it if you’re not comfortable having another folder like spam for emails to accidentally slip into. 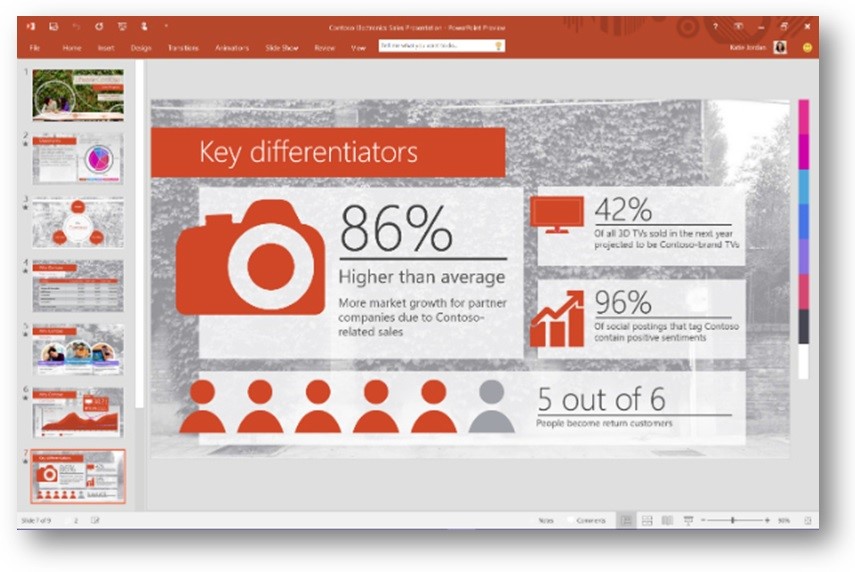 Along with the Windows 10 release, Office 2016 comes with a package with integrated Cortana’s functionality smoothly into its design. This gives more options to search but doesn’t directly improve office 2016 search function.

What does improve this search function is the fact that all the apps, including that of PowerPoint as shown above, have a new feature called Smart Lookup. This takes away those few seconds of wait time staring at nothing while your browser launches to look something up, as it does it directly from the application. This is especially useful if you’re typing something up in PowerPoint or Word and find that you want to double check a definition or quote context.

Additionally, a new feature called “Tell Me” is being incorporated in the Word, Excel, and PowerPoint that allows users to type in any function of the app and have a quick explanation indexed that was already prepared for them. 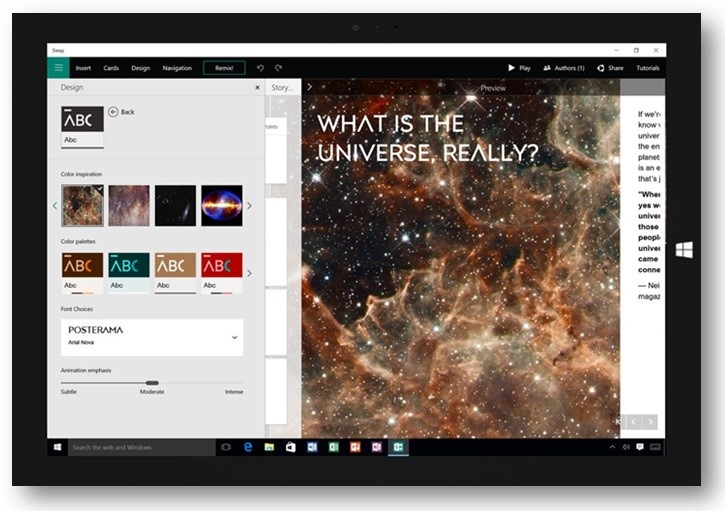 With Skype’s new full integration into Office 2016’s outlook and other app’s platforms, the companies that love and are already using Skype will be pleased by this integration. Those using other professional virtual connection software are a little less pleased.

Delve and the Office planner are essentially competitors to Trello for a browser based productivity software that allows member to assign and accomplish tasks while everyone see what is going on. These will be available for use in the coming Office 2016 update.

Sway’s introduction into the Microsoft family not too long ago allowed people to create a presentation that was meant for cross-device use and touch enablement. Sway is already open to the public but it is worth noting as it does quite a few interesting things that aren’t possible in PowerPoint.

With the world’s top productivity software providers looking to change the game when it comes to “collaboration”, Microsoft hasn’t quite been a true competitor until now. Besides SharePoint, Microsoft’s products were all mostly centered on single production followed by file uploading and opening. Now that all is streamlined into one process with these new updates. With Microsoft Office’s massive subscription base, this is likely going to be a well- received change as people have eagerly been awaiting Microsoft’s movement into this direction.