PHP is known as one of the most powerful open source programming languages to develop interactive and dynamic web pages. It was one of the most popular and widely used scripting languages that transformed the web. Over a period of time, there were a number of competitors like Python, Django, Ruby on Rails (RoR) and others that emerged. Given all the competition, where does PHP stand today and will PHP 7 withstand the competition?

Rasmus Lerdorf, a Danish-Canadian programmer, is the father of the PHP programming language. Acronym for Personal Home Pages and written in C, PHP became one of the most popular server side scripting languages of all times. PHP has given a tough competition to Java and Microsoft ASP.NET. It was known to power more than half of the websites and the rest was programmed in Microsoft ASP.NET, static HTML and Cold Fusion server. One of the biggest known reasons for the popularity of PHP is the fact that it’s given free with every Linux account. 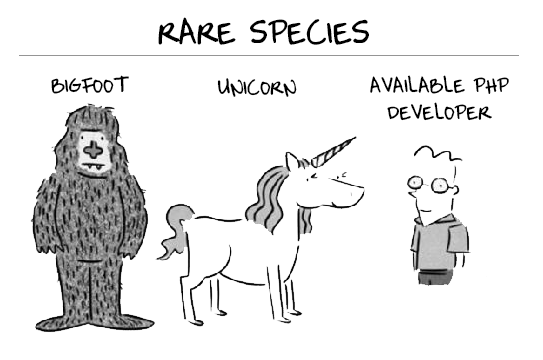 The PHP framework is known to be the most flexible and allows addition of scripts. Programmers can add new features in the core PHP package. The early 2000s are known for Web 2.0 and one of the languages that ruled the pack, yes you got it right, was PHP. We have come a long way from the 2000s and given the rapid pace, we wonder if PHP is still the power-packed programming language that it was.

So the basic question – Is there anything that PHP offers that other programming languages do not?

Not anymore. Since 2015, PHP has experienced a downward trend. There was a time when PHP was celebrated for the unique and dynamic features it could offer but not with other open source programming languages. Most of them can offer email clients, polls, blogs, Ad Management, calendar, wikis and social networking. WordPress, Drupal and Joomla have emerged as strong contenders to PHP.

As per the results of Stack Overflow Developer Survey 2017, PHP still occupies 28.1% of the market share (which is better than C++ and RoR).

And then came PHP 7

Yes, its version 7 is known to be PHP’s redemption. It enables twice (and even thrice) improved website speed, there is better memory consumption (at least 30-50%) and the ability to serve requests has tripled. Also, PHP 7 is largely dependent on compatibility with themes and plugins.

It is supported on 64-bit operating system to allow improved performance and support large files and integers. PHP 7 is expected to execute the code faster and there will be lesser number of servers required to address the same number of users. It also helps you manage fatal errors more effectively. There’s a new \EngineException object that doesn’t extend to the the \Exception Base Class. This helps in ensuring backward compatibility and facilitates traditional and engine exceptional in error handling. So that coders can identify both such errors, PHP 7 has a shared Parent Class under the name of \BaseException. You can use PHP Compatibility Checker to assess if your website is compatible with PHP 7 or not.

PHP 7 is being touted to provide some huge performance improvements. If you’re planning to switch, you can give us a call right away at +1-888-712-4344 or get in touch with us.