When you are developing a new app, the first step is to choose the right framework for the backend development of your mobile or web app. It is essential to select a framework that can provide you with all the features and functionalities that your app requires.

There are some common and general-purpose frameworks like React Native, Django, Laravel, Cordova, and Ionic, which many companies use. In addition, some frameworks are specific to certain languages like Node.js, Java, and Swift.

Business owners, software project owners, managers, and developers need to be aware of these different backend options to choose one best suited for their project needs. Afterall, this decision can make or break your project.

So why does Node.js stand out as the favorite when it comes to backend development for web and mobile apps organizations, businesses, and entrepreneurs worldwide?

Read on to understand the basics of Node.js and it relates to the backend for web or mobile app development. 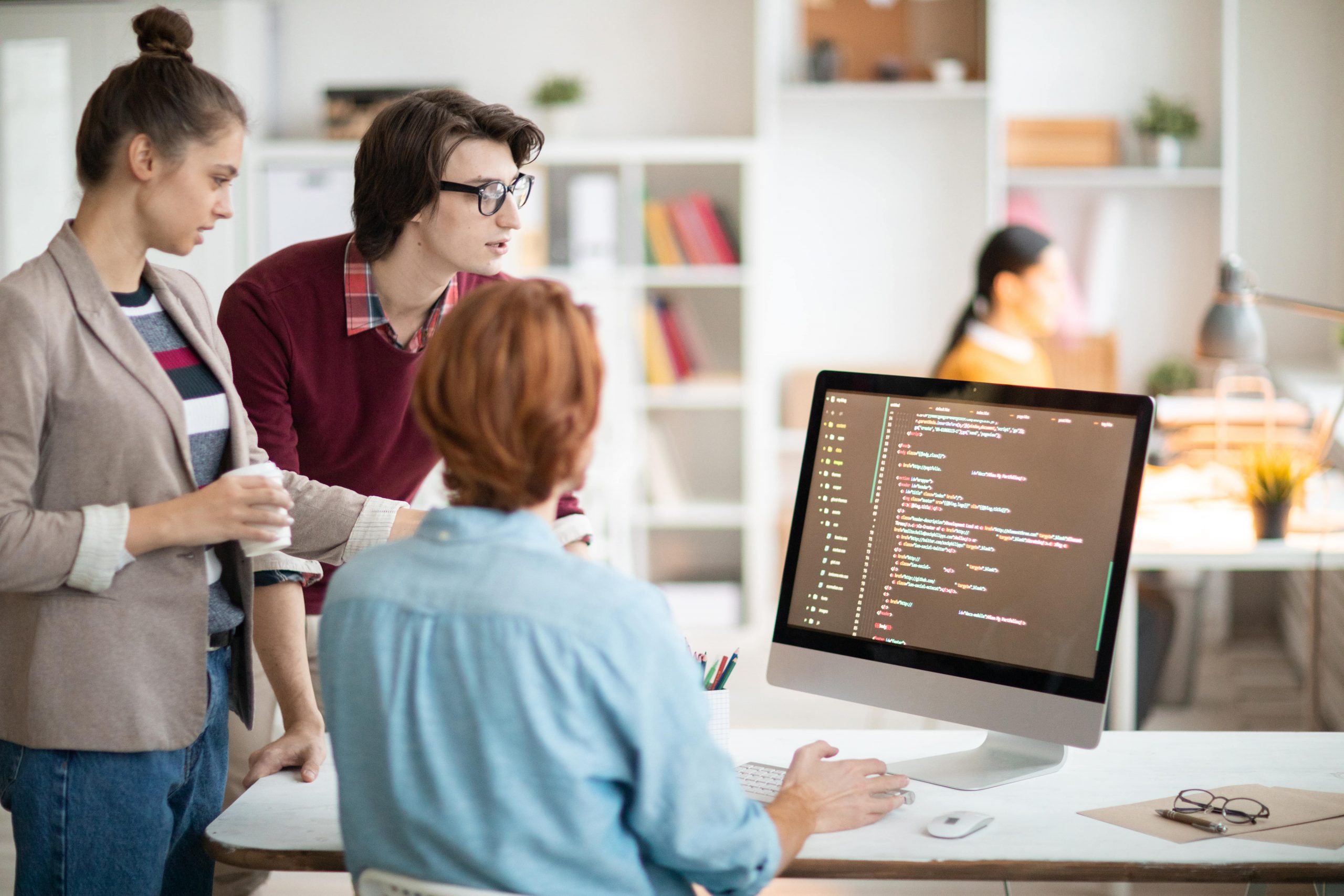 Node.js is a platform for building fast, scalable network applications. It is based on an event-driven architecture and uses an asynchronous I/O model that makes it lightweight and efficient. In addition, it provides fast execution of code in several languages, including JavaScript and Go and C++ or Java.

Ryan Dahl developed the initial version in 2009, and the first stable release was made in May 2010. Node has been downloaded more than 100 million times, and it powers more than half of the websites on the internet today.

Today, Node.js is used in over 80% of the Fortune 500 companies and powers over $10 billion worth of annual revenue for companies such as Microsoft, IBM, and PaPal, making it the most popular JavaScript runtime environment in the world. Some of the leading apps powered by Node.js include Express, SocketIO, Hapi, and Koa.
Node.js brings to businesses, entrepreneurs, and developers a runtime environment. This is a server-side JavaScript with a rich ecosystem of tools, modules, and libraries that make it easy to build web and mobile apps or backend services. It is used in many different areas such as web development, mobile app development, data science, IoT, robotics, etc.

How Does Node.js Work?

The backbone of how Node.js works is simple: use non-blocking, event-driven I/O to stay lightweight and efficient against data-intensive real-time applications that work on various devices.

So, in other words, the Node handles many concurrent connections without blocking the main thread, typically referred to as the event loop. This allows Node.js to scale up and process thousands of requests at once quickly. So what you need to bear in mind is that Node.js isn’t ideal for CPU-intensive performances. You’ll lose all its advantages when you use it for heavy computation.

One of the primary topics essential during the Node.js discussion is the in-built support for NPM-enabled package management. This is a default tool that accompanies every Node.js installation. The idea behind NPM modules can be likened to Ruby Gems. It’s a set of publicly accessible, reusable elements, accessible via easy installation through an online resource, dependency, and version management.

You can obtain the complete list of packaged modules on the npm website or via the automatically installed npm CLI tool. Everyone has full access to the module ecosystem, and publishing to the npm repository is open to everyone.

Among the current most helpful npm modules are:

The list of valuable packages is inexhaustible and readily available to all.

Advantages of Node.js For App Backend

It’s no surprise that Node.js is the most popular backend language in the world, according to a 2018 survey by Stack Overflow, with 46% of respondents saying it was their favorite language for development in 2018.

Node.js has become one of the most popular platforms for building scalable web applications in recent years. It has become a favorite among developers because of its speed, efficiency, and scalability. In addition, with Node.js, you can have multiple nodes running simultaneously and interacting, resulting in a superior web backend development solution.

It’s common knowledge that V8 engines are the leading engines available that were originally developed for Chrome. However, the development team behind Node.js re-engineered it to serve their purposes. It was created with C++ for the compilation of functions designed in JavaScript into machine code for remarkable performance and speed.

Talk of performance, this is perhaps one of the strongest suits of the Node.js framework. It excels when it comes to processing massive amounts of data simultaneously, making it the go-to option for backend development for the interpretation of JavaScript code with Google’s V8 JavaScript engine.

Node.js also made a mark among backend developers of mobile and web apps due to its asynchronous nature. After every function, the code issues an automatic callback. However, with the increase of functions, the callbacks also increase in a process called callback hell. Fortunately, the control flow features offered by Node.js provide a solution by enabling the mapping out of functions and sorting of callbacks.

This backend development language is able to handle thousands of processing requests at once. Therefore, as a data-handling tool, Node.js provides a perfect choice in terms of efficiency. Furthermore, unlike many other backend development frameworks that are only capable of synchronous processing of requests in a one-by-one manner, Node.js emerges superior with simultaneous data processing abilities.

Why The Shift Towards Node.js

Now, it’s run through some of the leading factors contributing to the sudden and continuous rise in popularity of Node.js.

Undoubtedly, one of the primary reasons why Node.js is popular is the role JavaScript plays in application creation. Also, JavaScript is the sole option for building new web applications for the web browser. This improved and robust framework shows many new developers a path to creating apps with the wow factor.

Every application running on Nodejs uses a fundamental event-driven architecture. This means every function occurs on it, irrespective of the operation. This series of procedures is termed an asynchronous callback. This property distinguishes Node.js since it efficiently runs single-threaded applications, unlike other web technologies, which spawn new threads per client requests.

3. Easy to Maintain And Modify

Conventional web apps are increasing in flexibility and adaptability over time to meet the market’s changing requirements. Consequently, the older applications tend to look outdated without new and frequent updates. Thanks to Node.js, developers can create several small applications rather than develop a small-sized web application. This way, tweaking and adding functionalities isn’t a big problem.

Thanks to the magical event loop of Node.js, it is lightning fast. Moreover, the speed of processing functions and callbacks gives Node.js an upper hand in terms of operation speed and how it executes tasks and client requests.

Where Node.js Can Prove Instrumental

Given these advantages and benefits of choosing Node.js for backend processing, here are the various instances it can help new and seasoned developers the most.

Node.js alongside Express.js can help build impressive web applications on the server side. However, even though this request-response paradigm is popular, it’s not the most standard use-case of Node.js. You can find different cases made for and against this approach. Below are some facts to keep in mind:

Instances Where You Shouldn’t Use Node.js

When it comes to exploiting relational databases such as MySQL, PostgreSQL, and Microsoft SQL Server, there is a clear preference for Ruby on Rails, especially when comparing it to Node.js and Express.js.

Previously, Node.js relational database tools were in their infancy. Rails, however, comes out of the box with data access configuration as well as DB schema migration assistance tools and extra Gems (catch the pun?). Moreover, Data Mapper or Active Record data access layer configurations are established and validated in Rails and its peer frameworks.

However, things are no longer this way. Bookshelf, TypeORM, and Sequelize have all advanced to the point where they are now mature ORM solutions. So in case you want to produce SQL from GraphQL queries, there are a lot more options at your disposal since Node.js isn’t the most appropriate in this instance.

With regards to highly demanding computing, Node.js isn’t the ideal option. Hence, you will need to look elsewhere if you’re looking to create a Fibonacci computation server. Generally speaking, you lose all the non-blocking I/O and event-driven benefits when it comes to operations that task the CPU. That’s due to the fact that the active thread will block incoming requests, assuming you are attempting to implement your computations on the same instance of Node that’s engaging requests.

Nevertheless, you need to offload all intensive processing to background processes developed in the right environment to handle that type of operation. By doing so, you have them interact through a message queue server such as RabbitMQ, whether you’re using clustering or not.

Even if you initially perform your background processing on the same server, this approach presents the possibility of immensely high scalability. Furthermore, with the need to set up the arrays of front-facing web servers, the various background processing services might be readily shared to independent worker servers.

Of course, you could use the same strategy on other platforms as well, but with Node.js, you get the high res/sec throughput we discussed earlier because each request is a minor task that can be processed fast and effectively.

Node.js is the backend developer’s favorite because of its scale and asynchronous nature. Indeed, it has a lot of benefits for backend developers. First, it comes with a robust set of features, including HTTP, WebSocket, streams, and more. With these features, Node.js offers better scalability than other backend languages such as PHP or Python. But remember, you can best enjoy all these benefits provided you’re using it in a scenario that doesn’t require massive CPU or blocking resources.
Given its popularity, finding reliable, experienced, and affordable developer talent can prove tricky, so contact ISHIR today for excellence you can trust.